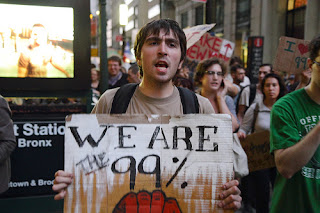 Does anyone reading this think that the wealthy should have more legal rights than the poor?  If so, please enlighten us on how that makes any sense at all.  Because I'd have to call that the stupidest, most offensive thing I've heard in awhile.
So it kills me to say that in America, the rich have more legal rights than the poor.  In this country, a rich person can have a poor person arrested for inconveniencing him.  Even if that poor person is protected by the Constitution of the United States, the police show no reluctance in arresting them and hauling them off.  After all, a public street is only public as long as we don't offend the businessmen nearby.

Over the last two weeks, thousands of Americans, indignant at the growing inequality between the rich and the poor, angry at the slow but steady destruction of the middle class, have gathered in New York in a protest known as Occupy Wall Street.

In their own words, "We are the 99% who will no longer tolerate the greed and corruption of the 1%."

This does not sit well with the nobility.  The rich prefer us to stay where we are.  They want us to stay home and watch TV, listen to commiserating songs, and if we do get angry about what's been done to us, they want us to blame each other.  Of course, they'll want that protest to go away.  And it's clear that the police, the very ones most charged with our protection, have sided with the wealthy.

Except that it does.

Maybe it shouldn't be surprising.  Not when the police mace people for no reason.  Not when peaceful protesters are caged and sprayed with mace, apparently for no reason. Congregating peacefully in a public area isn't a crime, after all.  It's specifically protected by the constitution!  But if your congregation annoys the wealthy, watch out.  You'll be caged, maced, and arrested.

Similar protests have sprung up around the country.  Boston, Los Angeles, and even smaller cities such as Charlotte and Oklahoma City have seen gatherings of protesters showing support for those in New York.  Arrests have been made there, too.

If there's any doubt that to exactly why the police are so clearly on the side of the wealthy, take a look at this recent release from JPMorgan Chase:

I like that part about strengthening security; it sounds a lot better than "keep those dirty poor people from bothering us."

There has been some support for the protesters.  The United Steelworkers Union has announced its support of Occupy Wall Street, as has the NYC Transit Union.

Stand up against these insanity.  We are American citizens!  We can not allow ourselves to be treated in this way!  Does that sound entitled?  Good.  We are entitled.  We are entitled to the same rights, legal privileges, and legal protection as the richest people and most powerful corporations in this country!

The conservative elite want to take away our liberty.  But we can stand up for ourselves.

We will stand up for ourselves.