Over at Business Insider, they've got an article up with a lot of charts that are absolute must reads for any patriotic American.  I've posted two of them below 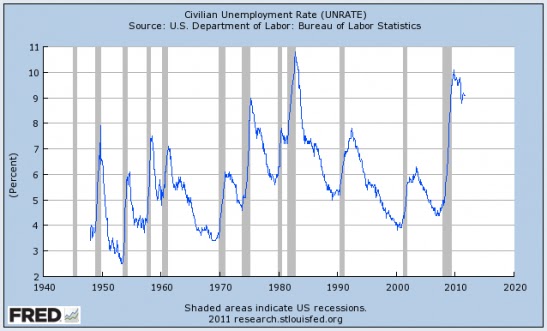 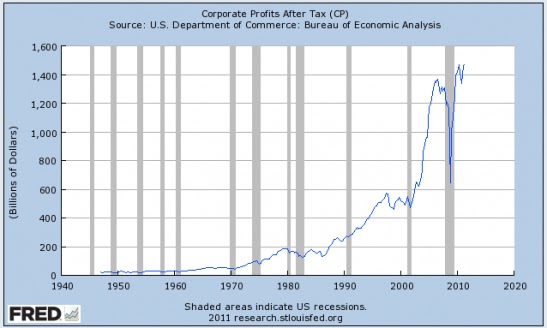 These charts tell a powerful truth.  While unemployment is higher, for longer, than it's ever been before, corporations are making record shattering profits.  The country, as a whole, is making more money than it ever has before.  We're a wealthier country than we have ever been.

America is more profitable than it has ever been, but more people than ever before are losing their jobs and their homes.  Where is that profit going?  To the corporations, of course!  Who use that money to buy more power in our government, and relax their own regulations.  Which lets them steal more money from us, which lets them buy more of our government, and so on.

A few months, ago Republican politicians demanded of Obama, "Where are the jobs?"  Now, as the jobless are finally starting to stand up for themselves, to blame the ones responsible for their joblessness, the Republicans have suddenly changed their mind.  They yell at the protesters, "Go get a job!"

It's typical conservative behavior.  If they can blame a Democrat, they'll admit there aren't any jobs.  They'll say it's Obama's fault.  But the instant the unemployed actually demand economic fairness, they claim there's enough jobs for everyone!  The jobless are just lazy!

The GOP is the definition of two-faced.  They're lying.  Either there aren't enough jobs, and the protesters can't find work, or there are enough jobs, and Obama has fixed the problem.  They want to have it both ways, but they can't!

Has Obama fixed the problem?  No -- the House of Representatives, ridden with Tea Party idiots, has forcibly stopped his every attempt.  There aren't enough jobs.  And the Occupy Wall Street movement is right.

They're the patriots.  Stand up with them.