﻿﻿Occupy Wall Street is getting some bad press.

I mean, it's getting some really bad press.  Especially from Regressive linchpin FOX News.


Famous reality denier Bill O'Reilly has declared that the protesters are jobless because "they don't want to work."  According to Kimberly Guilfoyle, the movement is nothing but a bunch of useless people who "dirty the streets."  Sean Hannity's response to the protesters is to talk over them, say they don't like freedom, and accuse them of destroying the country.
﻿﻿

And really, these are just specific examples.  Turn on the news and watch almost any coverage of Occupy Wall Street, and you hear the same thing over and over: they're dirty hippies who need to get a damned job.﻿
﻿ ﻿﻿ ﻿ ﻿ ﻿

Well let me tell you something: if they could get a damned job, they might not be there!  If the economy hadn't been wrecked by billionaires and their corporations, then maybe people wouldn't be this angry!  If those hyperwealthy that FOX News and their Republican cohorts keep calling "job creators" actually created some jobs, then maybe things wouldn't have reached this point!
But the economy was wrecked by these people.  These "job creators" don't want to create jobs -- they'd rather sit on their money than "waste" it on employees.  And so nearly one in ten Americans can't get a job.

Regardless of the facts, conservative newspeople and pundits argue over and over that Occupy Wall Street protesters must just not want to get a job, because anyone who wants a job can get one.
It's hard to figure out what goes on inside a Regressive mind, but it appears to be something like this: when the unemployment rate goes up, that just means America is lazier than usual.  It's apparently got little to do with the economy.  Because after all, even when some think the country's actually entering a depression, anyone who wanted to work could.
They're literally pointing at the the unemployed, the homeless, and the starving and saying, "The bad economy is their fault!"  Well, it's not.  You know who I point at?  The banks, the hyperrich corporations, and the billionaires.

This is THEIR fault. 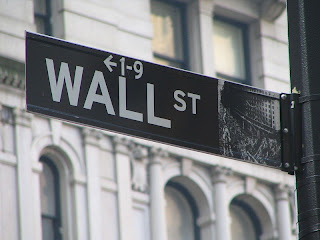 The American "nobility" and FOX News spout off about the horrors of socialism anytime they want to scare their peasants into giving them more power and wealth.  But these corporations and banks are the worst kind of socialists.  The phrase "too big to fail" is the worst thing that's happened to our economy in recent times.
﻿﻿
These corporations put themselves, again and again, in extremely risky situations in the hope of making extraordinary profit.  For years it works out for them.  But you can't keep sticking your hand into a grinder without ever getting hurt, and eventually they ruined themselves.
So far, so good, right?  Risk vs reward; the hallmark of capitalism!  But the corporations didn't think so.  They, and their GOP cronies, argued that they were too important to be allowed to fail at all!  So they got the biggest bailout in American history.

They can keep sticking their hand in that grinder as much as they want, now!  Because if they ever get hurt, they've got hundreds of billions of dollars worth of insurance money, sitting right here, with us!  The taxpayer takes the risk.  If the company fails, we pay.  If the company succeeds, then it profits.

Wall Street is the problem.  They directly caused the economic crash.  Not home buyers.  You'll hear that a lot from conservatives.  "Poor people were stupid and bought more than they could afford!  That caused the crash!"

Well of course the Regressives blame the poor, they hate the poor.  But it was Wall Street that saw an opportunity in high-risk mortgages.  They're the ones who encouraged the poor and middle class to buy more than they could afford, with lying explanations about how it would work out.  They're the ones who bundled up those mortgages into complex new securities, gave them AAA ratings, and made billions off of assets they knew to be toxic.  They knew they wouldn't be able to keep that scheme going forever; they just hoped they could keep it going long enough for their corporation to profit, and if the rest of the economy goes down the tubes, well . . . that's not their problem, is it?
Except they messed up, and when things went south, all of Wall Street was taken with it.  So they cried "too big to fail!" and got their trillion dollars in taxpayer money.

You know what they did with that money?  That money that they said they needed to continue supplying America with jobs and prosperity?  They gave it to their executives, as bonuses.  Some of these were even called "performance" bonuses.  I can only imagine that they were trying to rub it in.

Since 2008, the rich have gotten richer, while the middle class and the poor have gotten poorer.  The top six banks in the country are worth more than 60% of the GDP.  Profits in the Fortune 500 soared 81% last year.  That's almost double.  Non-executive wages and salaries?  Those went up barely 1%.

Compare that to Japan, where the ratio is closer to 11 to 1, or Germany where it's about 12 to 1.  Point this out and watch GOP pundits cry "socialism" and "destroying the country" until their throats are raw.   Because Japan and Germany are so lazy and unproductive.  Right.

The GOP has responded to this inequality by lowering taxes -- on the rich.  (They've increased taxes on the rest of us, and want to increase them higher.)

Interesting fact: a normal person can pay up to 35% of their top income bracket in taxes, and that's only if they're making more than $379,000 a year!  A venture capitalist making tens of millions a year pays closer 15%, and that's if he's not hiding anything. Why so little?  The Regressive argument about this basically boils down to, "But he's a better person than you, so he should get taxed less."

That's right.  If you wanted to be taxed less, you should stop being lazy and start making millions of dollars a year.  Anyone who isn't a billionaire doesn't even deserve to be listened to.

What if a bunch of middle class folks does demand to be listened to?  Well, they're labeled as a bunch of useless, dirty hippies.  If they wanted to have a voice, they'd go make a billion dollars.

Oh is that all.

First image by NYCCine, second by RMajouji, CC-BY-2.5.
Posted by Jacob Greene at 9:51 AM